What's on your mind?

Motis: a 27 degree inclined planet, with almost no eccentricity, has breathable but extremely thick atmosphere. (Has one asteroid moon called “Borealis”

Fousil: Similar to Duna conditions, this planet has a very thin atmosphere and is the color of cherries, with liquid water lakes all over. (One asteroid moon called Aquarea)

that are so close together they share a collumn of rock between them. (2 moons, Hanuca and Damu, both are the size of the mun)

Isiros: Ice world with no atmosphere, and one instresting feature (Has one moon called Hamarkis [Hamarkis has a moon moon the size of minmus called Nirgal, both are named after features on Mars])

Roria: Tiny planet, similar to the color of minmus, with orange cracks all over. it has a 1 km deep canyon that stretches across the planet between the poles. It orbits near where Dres would be, and is extremely inclinated at 46 degrees and has an eccentricity of 0.3 (no moons)

Diplomia: 3 Jool mass gas giant, it is striped with bright orange and cream colored bands. It is flipped on its side, with its South Pole facing the sun. (3 large moons, Oahuo [larger version of laythe], Ionospha, and Tektap (4 times bigger than tylo)

Tectonica: Small blue gas giant around the size of Eve, it just barely qualifies as a gas giant, with a very thin atmosphere when compared to gas giants like Jool or Sarnus. It is actually able to be landed on, as it has large floating chunks of low density rock that float in its atmosphere, supported by the thicker liquid methane atmosphere below. (One moon: Aurora, with a mass similar to Moho. It has a almost atmosphere and only 2 islands, surrounded by liquid fuel oceans)

Soraloa: The largest planet, this planet which is 10 times the size of Jool, has a light blue and purple atmosphere. It has 6 moons, Echo, Halo, Rheon, Rainbow, and Quote. All are asteroid moons except Halo and Quote, which are great for gravity assists into Soraloa orbit.

Areoatla: Jool sized rocky planet, this appeared to be a habitable super-kerbin before migrating to the outer system and freezing. It has a retrograde moon called Ala which is about the size of kerbin, Ala is great for a challenging mission if you want to make an impressive surface base in one of its many caves and lava tubes.

Utoia: Moho sized planet, it is on a almost solar system escaping trajectory. It’s orbit takes 200 times the amount of time as eeloo. It’s periapsis is just above the orbital height of Areoatla, and apoapis is 30 times that distance. Has 2 moons, Opop and Dyso. 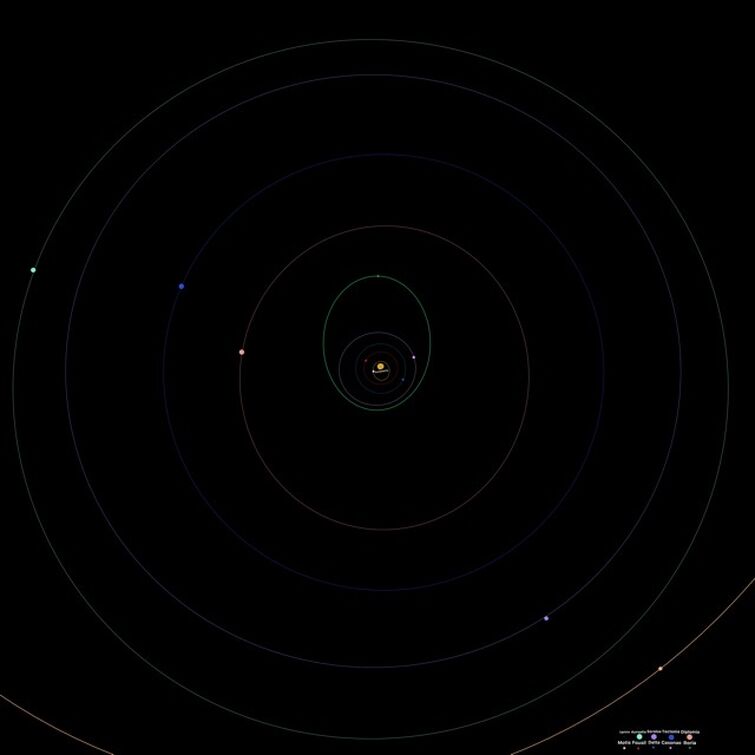 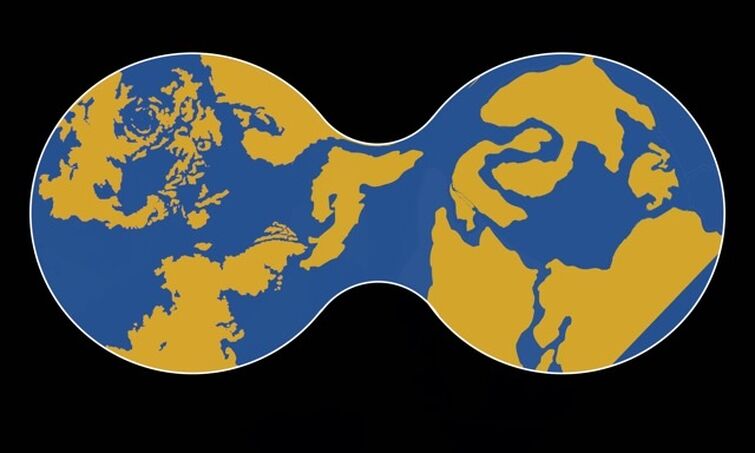 The two planets that make up Delta

(edited by Acorn The Rainwing)

I am Above the Developer of KSP in Rank

So I've been messing around with the mod since .08 release, and one of the things that annoyed me the most (besides TweakScale incompatibility) was the absence of warp thrust. In case you don't know what that is, it's like when you use x4 time warp while performing a long burn. But in some mods, the really sweet engines have to ability to continue burning at max thrust while in the highest possible time compression speed. This allows for relativistic speeds, but it only takes maybe 5-10 minutes at 100000x normal time. I would love to be able to do this with the SRX. I feel it would make the really far away systems much easier to access.

I would, however, like if an option to keep the stock system, not only because the modifications here ruined it, but because I want compatibility with other planet packs that actually do a GOOD job at modifying Kerbol. There's an option for a tropical Laythe, why not an option for a removal of the terrible modifications to the stock system. I want other star systems, not a badly executed slaughter of all the things that made the Kerbol system cool and fun. I am sure I'm not alone here.

So, I was wondering if all the stars with planets were on the main list for the arms and not in other stars.

Also, WHat is your favorite system? and galaxy arm

KSS has been slowly leaking portions of the lore through both the game and the wiki/forums. I thought this would be a good idea for everyone to collect themselves together and try to figure out what the mysterious StarCrusher96 is trying to tell us about the nature of The All, the unexplained Creator, and the hypothetical Precursors.

Post your ideas here! From individual planet concepts to complete systems. And maybe your idea might get implemented in KSS one day.

(please keep it a little realistic)

If you haven't realized yet, KSS has been introducing Easter Eggs into the mod since 0.6. We haven't said what they are for the most part, but they're there!

Think you found one? Let us know in the comments under this post, and we'll tell you if you actually found something!

Aquel is most well known for its deep ocean. It is so deep, in fact, that the water eventually solidifies under the pressure. Your mission is to get a probe to the bottom of this ocean and return to Kerbin, so we can observe the effects of the ocean along with the composition.

- When you reach the bottom of the ocean, have a kerbal take a sample

The temperature just above Kerbol is about 2.5 million degrees. That being said, it's difficult to get close to Kerbol. This challenge is aimed to those who want to set a record.

- Get as close to Kerbol as possible

This challenge is like the Ilve Survivor Challenge, but harder. Iain is a small gas giant with a atmosphere just thin enough for a spacecraft to survive in. Unlike Ilve, Iain's diameter and atmospheric pressure are higher, meaning that a take-off from the planet is guaranteed to be much more difficult.

- Stock parts only for the lander.

- That's it. Use some creativity with this one, you'll need it.

This is one of the more difficult challenges in KSS. To accomplish this one, you must send a probe to The All and explore the bodies around it. First, you have to set up a relay system that will allow you to transmit valuable data to and from The All. Then, you must launch a probe (or a kerbed craft) to The All and reach it within 50 years. For bonus points, have probes land on Novus and The Creator.

- The relay is not required, but is easier opposed to having to bring your craft home.

- Setting up the relays does not add time, but if the main probe itself takes more than 50 years to reach The All, then you will have to start over.

- Reaching The All is defined as being able to see it in-game, or outside of map mode.

This challenge is similar in style to the Jool 5 challenge, but it is about the moons of Mirn. Once you get to Mirn, you have to land a single spacecraft on each of the moons and return back to Kerbin with all the kerbals you returned with.

- This has to be done in 1 mission. You can assemble a spacecraft in orbit, but once you get to Mirn, you can't dock with other crafts.

- There must be a flag planted on every moon.

- Bonus points for each kerbal (above 1) that lands on a moon, or having a probe descend into the atmosphere.

Hypat is a unique planet in the sense that it is very distant from Kerbol. Because of this, Hypat experiences properties that you can't find on other worlds. It is up to you to get to Hypat and find this stuff out. You must reach Hypat as fast as possible.

- You can build a craft in orbit

- You have to reach Hypat in a reasonable time. No more than 20 years. Of course, you are aiming for speed here, so less than 10 years is optimal.

- 1 bonus point for every kerbal on board.

In the Grand Tour Challenge, you will be recreating the Voyager Missions. You have to do a fly-by of Jool, Voon, Oran, and Naal using 1 spacecraft. This is one of the easiest challenges to accomplish, and is a good starter challenge for inexperienced players.

- The whole mission must be accomplished using 1 craft. You can launch more than one craft, but at least one has to complete the whole challenge.

- Bonus points if you can achieve a fly-by of any additional bodies using that 1 craft. This includes moons, additional planets, comets or dwarf planets, etc. Kerbin only counts if you return to it after leaving its SOI.

- How you achieve this is up to you. You can make as many fly-bys as you want

This challenge requires you to travel to Kormin, and survive diving into the superheated atmosphere without burning up.

- You can only use stock parts in the diving probe

- You can't just barely skim the atmosphere, you have to make it the whole way down.

- The less parts you use the more points you get.

The Kelnis 7 Challenge is similar to the Grand Tour, but around the Kelnis System. Do accomplish this, you must complete the specific tasks:

- Plant a flag on each of the planets

- Use stock parts for the lander/system navigator. You are allowed to use modded crafts to get to Kelnis, but once you're in orbit, it's all stock parts.

This is one of the hardest missions in KSS, but the objectivce is pretty simple: visit every star system using 1 craft within 100 years. Interstellar parts from mods are allowed, as I'd feel sorry for anyone trying to do this with stock parts. You are not required to achieve orbit/land on any of the planets, but you'll get bonus points if you accomplish that.

This challenge sounds easier on paper than it does in-game. The task is simple: Get to Ilve, send a kerbal to the surface, plant a flag, then take-off and return back to Kerbin. Sounds easy right? That is, until you take away the "take-off" part. With a crushing 3.87 gees and 12.2 atm pressure, leaving the surface isn't going to be an easy feat.

- The lander must be made entirely of stock parts. The interstellar craft can use whatever you want, but the lander MUST be stock

- You have to return the kerbal to Kerbin. This means you can't leave him stranded on Ilve for eternity.

- 3 gold stars will be rewarded to whoever completes it first!