I do not know if this has been suggested before, but I'd like some Epsilon Eridani analogue (i.e. a young system with 2 asteroid belts and an outer dust dusk)

I actually think such planets could exist- their masses shouldn't be enough to collapse into degenerate matter, and their cores wouldn't have any hydrogen to fuse (assuming they all have metallic and silicate cores)

However, they probably would accumulate extremely thick atmospheres, right on the edge of a gas giant.

How about a Quaor-Vanth analogue?

Some subtle references to deceased scientists. For example, you could name a certain basin for Stephen Hawking, or an island for Albert Einstein

A model Lunar Lander on the Mun, dedicated to all the Moon landings

...I ran out of ideas already

Wait, doesn't Karkua already have one?

How about this: The "seas" on Eve were the result of an optical illusion, much like the false discrovery of canals on Mars. Eve appeared to be purple because a previous scientist left his 3D glasses on the telescope. The unusual amount of clouds were the result of 2 of Eve's supervolcanoes coincidentially erupting at the same time. All the recent announcement of their mistakes has caused many young kerbals to lose some faith in science, some going as far as to state that space was a hoax.

Nothing to do with the lore, but I feel like it could be an entertaining sidestory.

How about a star system that's still forming? The system has a large dust disk. There are 3 major planets, 2 rocky and 1 gas giant, as well as 6 dwarf planets and 10 asteroids. The rocky planets are partially molten from impacts, and the Gas giant glows a soft orange from internal heat. The star itelf is a Herbig Haro object, throwing large fountiains of gas hundreds of KAU in length.

-You can also put this in a larger starburst region, analogue to the Orion Nebula. There, you can place some of the planned O-class stars as well.

a quaternary BD system is a bit too much, yes?

here is my suggestion- around Korlon, there should be a dwarf planet about 3x Kel's mass. though once like Kel and Char, the expanding HZ melted the water, creating a planet sized seaside resort. The temperatures are relatively warm, but cool enough to sustain ice caps. It has a thick nitrogen-methane atmosphere for it's size, with about 12% oxygen, 2% Argon, 2%Helium ( from the star ramming it with its outer layers). It also has a few small shallow islands, and shows sogns of gas volcanoes, erupting thawed methane and oxygen from underground. the atmosphere is not breathable, but kerbals really only need an oxygen tank. It has 2 round moons, both tidally locked.

A triple star system consisting of a red dwarf (0.7 Kerbols) and a binary brown dwarf. The system is rather loose, with the binary BDs orbiting the parent star at 700 KAU and orbit each other at several KAU. One BD has rings and a habitable moon (from tidal heating). There are a few simple black plants that absorb the weak light from the BD.

Maybe you could add dust clouds for esthetic effects... after all, the image below looks nice with dust clouds, yes? 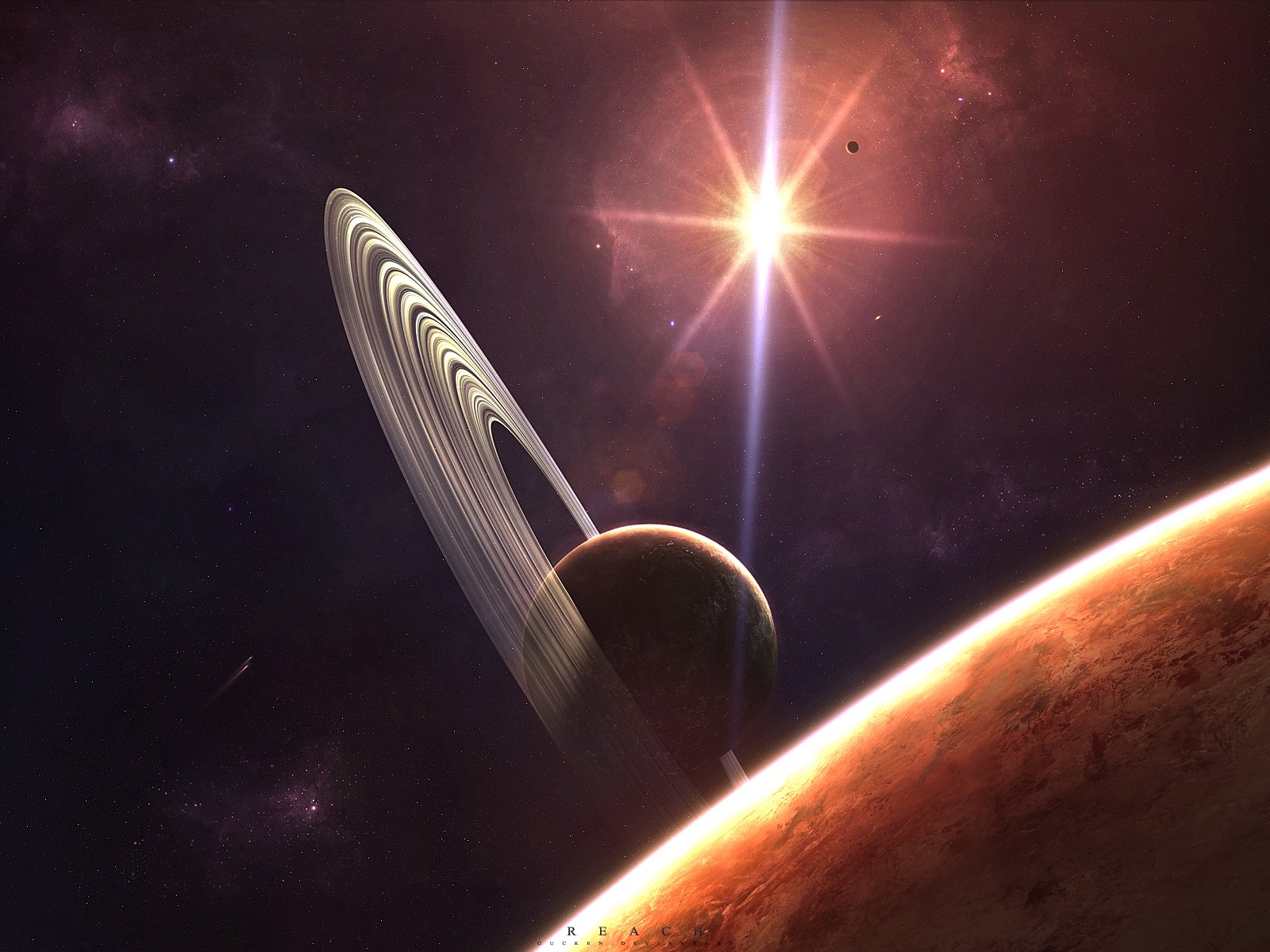 A small rocky planet with a nitrogen atmosphere. The atmosphere is slightly thicker than Kerbin's, and has a deep violet sheen. Surface minerals are actually visible from space. Deposits of Iron oxide, Copper oxides, Celestine, Bauxite, and Pyrite give the planet a multicolor appearance. This planet was discovered shortly after pertubations were detected in a "Hot Dres" that orbits close to its star. Then, they found that this planet happens to partially transit its parent. It is about as massive as Duna, and has 2 asteroid moons and 1 small rounded moon. After a small probe was sent there, they detected weak radio and x-ray signals eminating from a point near a small crater. A later ground probe and rover then found multiple artifarts, such as a probe core, and what appears to be a mobile proccesing plant. There is what appears to be a desolate ancient outpost (if you can add structures), but shows no signs of anything to control/moniter the probes.Even stranger, the core's signal is released in an unknown pattern, directed nearly right at Kerbol,with the only code cracked seems to represent Kerbol, Nova Kirbani, Kerolon, Nessus, Kelaris, an unknown star, and the All.

**To further add to this, there should be another similar outpost on Kel, but with no artifacts.

I also strongly suggest that later on, on minor updates you slowly and gradually make the landscapes more detailed and realistic, sometimes on a few bodies so the change won't be too sudden and you guys won't be overloaded. I also have another suggestion for kerbin: roads. They're just basically strips of textures like concrete or dirt not actual structures, and their only purpose (I guess) is to make the KSC feel a bit less lonely.

A large system with not one, not 2, but 3 habitable planets as well as another habitable moon to boot. You can do whatever you want with the planets and moons, but I have a few suggestions.

-The system is slightly larger than kerbol, thus giving it a slightly thicker HZ

-one of the planets is a shallow ocean world

-one planet has a large, ancient impact crater filled with water 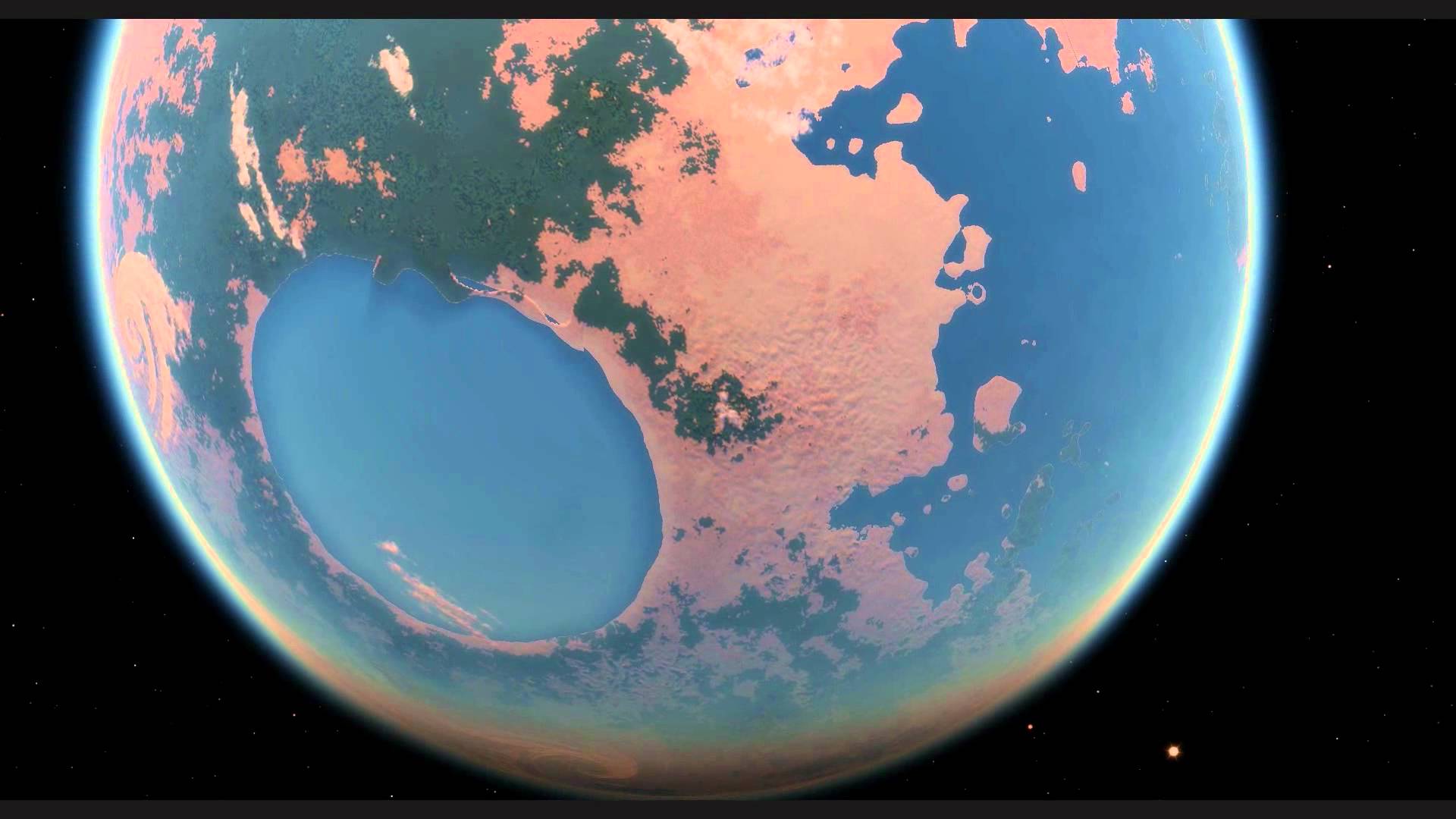 A small open cluster of large, hot B and O stars. They aren't within the Kermes cluster, and are their own in their own right. They are somewhat hesd together by their own massive gravity as well as a central pulsar. The pulsar was designated by Kessier Kerman as the 113th object, thus the cluster is known as K113. (Pleaidies analogue). However, scientists calculate the cluster itself orbits the all with a orbital eccentricity of .93.

Binary ringed planets. Their rings are kept stable by having nearly .07 KAU seperation. Oh, alse thir SMA from their parent star is nearly 70 KAU. One planet is covered in ice flats and ~2-30m tall ice crystals. lakes of liquid nitrogen can be found here. The other is an ice giant.. It has an upper atmosphere composed mainly of neon as well as 2H and He. Imagine something similar to the image, buth with much more seperation. 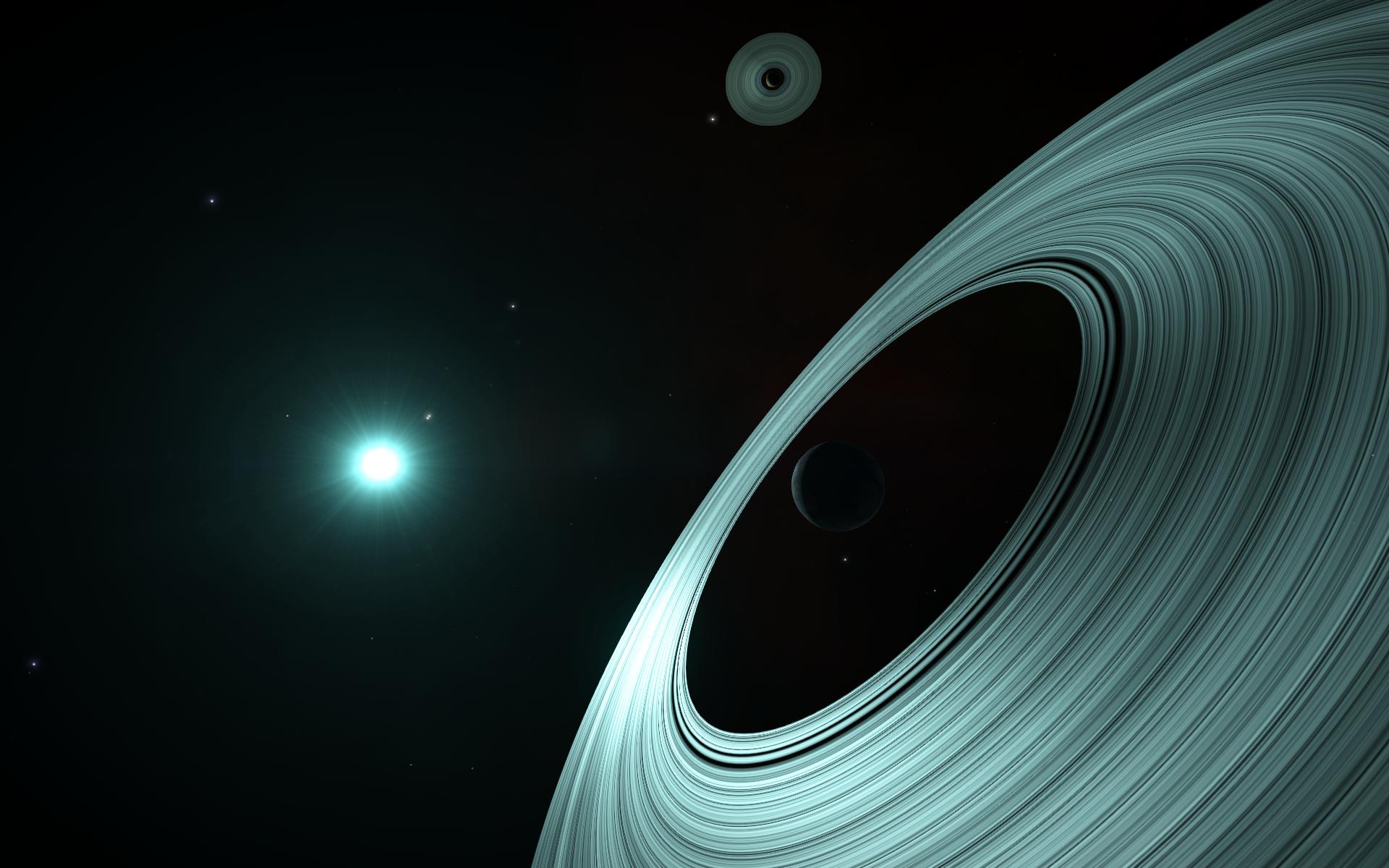 I looked at the OPM sigma expansion and found that 1 planet was tilted 90 degs. in axis. I saw this in a couple other mods, so I'm assuming you CAN change obliquity but only to either 0 or 90?

I do have one idea: that the change of color from the Stock Eve from purple to tan could be connected to the precursors... or maybe a colorblind astronomer.

A "rogue asteroid" that is flying through space. It has a mix of strange features and charachteristics, some of which are simply unimaginable.

An Epsilon Eridani analogue (as in it has 2 asteroid belts and another outer dust belt). The system is relatively young, so any life there would have to be simple possibly only anærobic organisms.